This from a National Geographic report dated August 25th, 2008 by Anne Minard

Cattle and deer all over the world tend to align themselves with Earth’s magnetic field, according to new research.

Both types of animals appear to graze in a north-south direction that aligns with magnetic north, not geographic north, according to European researchers who scrutinized thousands of Google Earth images. 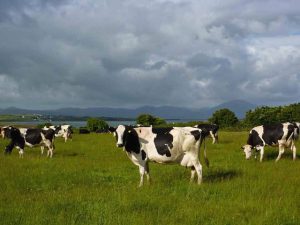 Birds, turtles, and fish are known to use magnetic guidance in migration. And among small mammals, a handful of rodent and one bat species have been shown to possess a magnetic compass. Sabine Begall, a zoologist at the University of Duisburg in Essen, Germany, and her colleagues propose that large mammals may also sense Earth’s magnetic field.  But why the non-migrating animals would align themselves according to Earth’s magnetism is still a mystery, the authors say.

The study appears in that week’s issue of the Proceedings of the National Academy of Sciences.

Begall said her team first got the idea to look for cows’ sensitivity to magnetism after one of the co-authors, Hynek Burda, also of the University of Duisburg, discovered such sensitivity in African mole rats.  (Related story: “Rat Radar: Rodent Uses Natural ‘GPS‘” [January 29, 2004])  “At one point last year the question came up whether large animals could also sense the Earth’s magnetic field,” she wrote in an email. “But of course, it is difficult, or maybe impossible, to do these studies in the lab.”  Instead, Begall and her team surveyed Google Earth images of 8,510 cattle in 308 pastures and plains around the world and examined other data collected on 2,974 deer in more than 225 locations in the Czech Republic.

They found that the animals, when grazing or resting, tended to face either magnetic north or south.

The research team looked for fields all over the world where magnetic north was to varying degrees either west or east of geographic north.  Grazing animals are known to orient themselves to minimize heat loss by wind or maximize their exposure to sunlight.  But the universality of grazing positions across the globe—and across various climate conditions—was not diluted by either of these factors, the study authors found.

The researchers conclude that the Earth’s magnetic field is the common factor that could somehow be influencing the animals. “[W]e were surprised to have such a wonderful tool like Google Earth, for free, and that no one has ever used it for biological studies in general, and especially not in orientation studies,” Begall said.  To further test their results, the team assigned university students to analyze the same Google Earth images, and the students turned up the same result: Cows are grazing in positions that align with Earth’s magnetic field.

Wolfgang Wiltschko, an ornithologist with the J. W. Goethe University in Frankfurt, Germany, called the alignment “a very curious phenomenon.”  Wiltschko, a leading expert of magnetic orientation in animals who was not involved in the new paper, said the study conclusion “appears to be quite clear-cut from the data.”  He noted that it remains unclear whether the cows’ alignment with Earth’s magnetism is related to orientation and navigation in other species.  He said termites align their mounds with magnetic lines in Australia, where it might help to coordinate building activities and serve as air conditioning. In many other cases of non-migrating animals apparently responding to Earth’s magnetism, though, “nobody knows so far what advantage this might have for the respective animal,” he said.

Begall and her co-authors also note it’s unclear why cows and deer would align themselves with Earth’s magnetism. But it could have management implications, she suggests.  “If we assume that our findings are real, we could ask what consequences does [barn] housing in east-west orientation have,” she said.  “Does it influence the animals’ physiology, as in milk production?”