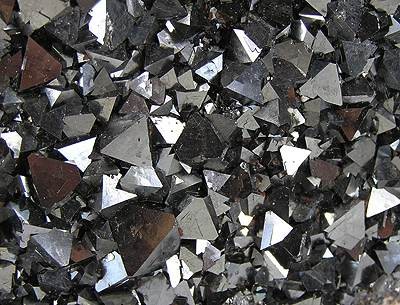 Magnetite is a mineral and one of the main iron ores. With the chemical formula Fe3O4, it is one of the oxides of iron. Magnetite is ferrimagnetic; it is attracted to a magnet and can be magnetized to become a permanent magnet itself. It is the most magnetic of all the naturally-occurring minerals on Earth. Naturally-magnetized pieces of magnetite, called lodestone, will attract small pieces of iron, which is how ancient peoples first discovered the property of magnetism. Today it is mined as iron ore.

Small grains of magnetite occur in almost all igneous and metamorphic rocks. Magnetite is black or brownish-black with a metallic luster, has a Mohs hardness of 5–6 and leaves a black streak.

The chemical IUPAC name is iron(II,III) oxide and the common chemical name is ferrous-ferric oxide.

Found in animals, birds, insects, mammals and fish, it has now been discovered in humans. It is miniscule, placed next to the pineal gland in the centre of the brain!  But what’s it doing there? Is it the chains that bind us forever to the earth?  Astrologica says “YES”.

Melatonin, also known as N-acetyl-5-methoxy tryptamine, is a hormone that is produced by the pineal gland in animals and regulates sleep and wakefulness. Melatonin is also produced in plants where it functions as a first line of defence against oxidative stress.

It is essential we produce it constantly for it quickly disappears from our bodies. We only produce melatonin when we sleep. It has to be concluded that it is likely, given that the pineal gland performs this function, that the magnetite is the ‘clock element’ that instructs the pineal gland when ‘night’ is because we do not produce melatonin in daylight. If you were to fall asleep in the garden on a sunny day, you would still not produce melatonin. It has to be in accordance with your circadian rhythm ensuring it is during night-time.

NASA discovered that when ‘astronauts’ are off the earth’s surface, they do not produce melatonin and it has to be provided for them in pills.

When a baby is born but particularly at the time when the waters break in the womb, I contend that it is the moment when magnetite is linked to the earth’s magnetic field and its position. It takes some three months after that for the baby to be embedded with it’s circadian rhythm. From then on the child is hooked onto the Earth. Its base behaviour will be ‘informed’ and ‘underpinned’ unconsciously in all it is and does, thereafter, by its polarity.