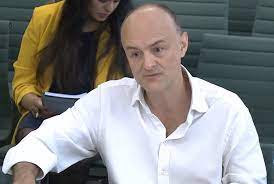 From the start, I have sought to disprove my hypothesis. I haven’t been able to do so, so far. Time and again even my own doubts have been challenged and reaffirmed. Recently we saw the despatch of the worst prime minister in British History (even, in my opinion, including Neville Chamberlain, and that’s saying something). She has been rightly replaced with Boris Johnson. The thing is Boris is a 3+/1- type but so was May and Chamberlain).

But there is a saving grace. Johnston is under the greatest pressure ever facing a PM outside Churchill (also a 3+/1- type) and WW2 to do what’s necessary. So why should I have the faith I do in Johnson. Well, cometh the hour, cometh the man, as they say and there is much to compare the great Churchill with Johnson. But there is one very special thing indeed. Churchill had a conciglieri named Brendan Bracken. Bracken was the Minister for Information made famous by George Orwell in his novel 1984 who referred to him when he worked at the ministry as ‘Big Brother’.

Well, Johnston, too, has his Big Brother consigilieri in one named Dominic Cummings who, as it happened, was deemed to be the architect behind Brexit. What makes Cummings so special is his magnetic code. You see from his date of birth I had rushed to judgement initially in assessing him to be a Sagittarius born 21 November 1971, and a Sagittarian/Pig at that, making him 1+/3-. Without checking it, I was puzzled how a 1+/3- type could be so elevated. Truly, he is background material in his behaviour and ability but, still, 1+/3- type here did not compute.

I thought I had found a chink, at last, in my system. I was concerned and devastated in some way. Then I saw a newspaper article which had a picture of him in number 10 and a statement as to his behaviour and I thought there’s no way this guy meets the criteria of 1+/3- magnetic type. So, I checked my information more carefully and, in doing so, the bombshell dropped – his birthday was 21 November that’s Scorpio, not Sagittarius. Whoohoo! Scorpio/Pig is 4- magnetic type.

Not only did it bring me great joy, I was so happy that he was exactly what he should be for the position he is in and the behaviour he has so far shown.

Mostly, I am delighted because I can assure everyone he will, as 4-, if it is at all possible, get the job done!

Interestingly, all 8 UK prime ministers – and their opposition leaders – from Douglas Home to Gordon Brown were ‘passive’ (calm types ranging from 0+ to 2+ but, since then, we have suffered utter fly-away shambles and chaos as Cameron 3+, Clegg 3+, Corbyn 3+, May 3+, Johnson 3+ and even the unhinged, unbalanced Speaker Bercow 3+. No depth of thought exists.

n.b. Since this blog of 2019, I have been unable to find the original newspaper article that stated Cummings date of birth as 21 November 1971 but everywhere states it now as 25 November 1971. This will mean he IS Sagittarian/Pig – in other words 1+/3-. I must accept it as the fact but I remain unconvinced and believe he has all the abilities and striking powers of a Scorpio and, moreover, a 0+/4- type. If anyone at any time can verify his date of birth, I would be very grateful if they would contact me at [email protected]